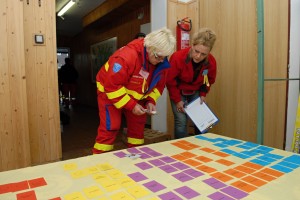 At the time when Rallye Rejviz began, EMS Dispatch wasn’t

known well. There were few workstations, with few exceptions, they managed 2 – 3 crews with physician. To do a shift – it was considered as a punishment, or when someone wasn’t able to or didn’t want to drive an ambulance. There was nothing to spoil and even if, the problem stayed within the four walls.

An urgent economical and organisational need of centralized workplaces occurred when founding a regional emergency medical services had risen. Massive extension of paramedic crews had been turning into reality as well. It was immediately clear that EMS cannot exist without a properly working Dispatch Center and it cannot be a “depository” of incompetent and incapable empolyees. On the contrary, it has to be a workplace for people who are able to manage increasing stress, sorting out the calls, dispatcher-assisted first aid. They learn to work with new technologies necessary for management of EMS in such a big area. 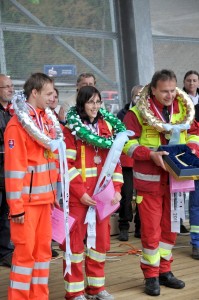 In the first years the competition was totally independent but that “separated“ the dispatchers and slightly pushed them to the edge of “colourful and attractive“ tasks with flashing lights of ambulances and lots of actors. We realised that this was the exact opposite of what we’ve been trying to achieve. It seems to became clear that dispatchers belong among rescuers equally even though they are not seen on the streets.

From 2008 Golden Headset works according to principle “don’t come to RR without a dispatcher“. Dispatcher is a full member of each paramedic crew, who accompanies them during the whole competition. Both competitions mingle at some moments. Every crew is kind of a “small size EMS“ which has to work as a team, exactly as in real life. Just as in real life, the work of the dispatcher is included into the evaluation of the whole team…

A driver with a paramedic are allowed to watch often understimated work of a colleague from the dispatch center thanks to this format of competition. They often have to tie up to his work in the next task. The view of the situation becomes really complex and the cooperation must be perfect. Besides that the competition gives a chance to the organizers for some mischievousness. Every year we try to give paramedics chance to experience dispatcher’s work and vice versa – dispatcher “touches“ a real patient and shows his skills.

According to reactions of competitors and the feeling of organizers, this new format seems to be perfect. There is only one and constant problem – how to fulfil the competition with new, attractive, unexpected and hard tasks. We strongly believe that this year will be full of tasks that instruct and amuse to the same degree.